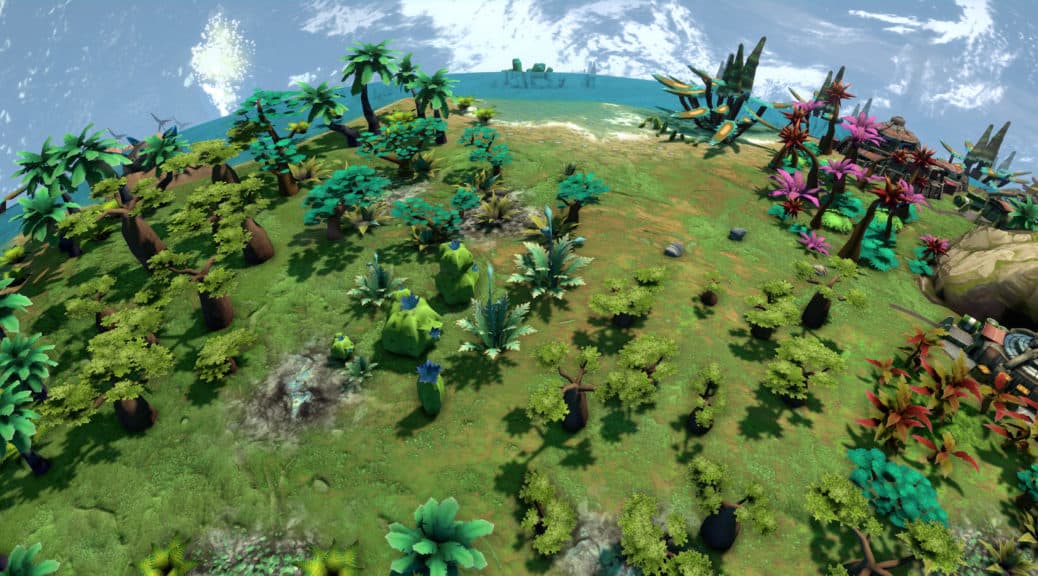 Dear all, we have been working on improvements, fine tuning and bug fixes for quite a while now. This is the basis for us to offer innovative features for Imagine Earth again from now on! We are very excited about this and hope you are too. If you scroll down to the bottom of the post, you will have the opportunity to name your own planet name in the game.

We are always looking to lower the barriers to entry into the game and gather your feedback. The most common criticism is the chattiness of characters, especially that they seem to explain too many details about buildings and tools to players, interrupting the flow of the game. This is also addressed in this update. The player can consciously choose his difficulty level at the beginning of the campaign and also determine the story mode.

Now you can choose which difficulty level you want to play at the beginning of the campaign, and we’ve included a reduced story mode that allows you to experience the campaign exclusively with the dialogs relevant to the story.

We have added more contrast to the rendering of buildings and forests. This should make them look more vivid, stand out better against the terrain, and give them more intense color depth and shadows. To do this, we turned up the Ambient Occlusion and made it dependent on the time of day and added an exception for metallic surfaces. Sunlight was made a bit stronger overall and more Exposure was added to the night side. Well, you never think what a well-rounded look causes for work.

There is a new, third vegetation in two of the planet themes. Along with the terran forest and the mushroom forest, it is something between deciduous and flower forest. It is rather slightly alien and exotic. There is not much more to say about it, you just have to see it up close.

To some players it seemed as if Imagine Earth was virtually trying to coerce them into using renewable energy sources, yet our goal is to represent global warming authentically and keep all avenues open to the player. In fact, the fossil sources in the game were disproportionately unproductive. Now they produce more, but also the deposits in the earth last longer and allow full productivity until the failure of the unit. After all, the main problem in today’s world situation on Planet Earth is not that coal and gas are all going, but that we can’t burn any more of them without driving global warming to dangerous levels.

At this point I’d like to weave in a personal note from the development department. Myself and Martin have been working on this game passionately and dedicated for many years, but currently every update has the stale aftertaste that with every improvement we somehow only create new demands. Some people don’t seem to realize that Imagine Earth is an indie game and already has a lot of features under the hood. If you like it, help us with your feedback and write a review, there is nothing that helps the project more.

There is now a lower start and end goal for population growth in this mission so the challenge is not too demotivating. You can now no longer form an alliance with Joe Dectow, and he no longer builds department stores almost exclusively. The landing permit you get after the challenge can now only be used to build up the destroyed colony, which prevents a potential dismantling of the whole colony. All alien NPCs now have greetings out again when you visit their camps, cities or ships. Natives respond more directly to donations.

We have introduced a limit on negative events, while the emergence of riots in the colony illustrates a dangerous undersupply of the population or the spread of diseases makes too high pollution noticeable, these and similar events should not dominate the gameplay and make it annoying.

There is no longer snow on active colony buildings. This doesn’t look quite as great as a completely snow-covered cities, but it’s worth its weight in gold for building recognizability.

This goes out to everyone who has already built their own planets with our terraforming editor and shared them via Steamworks. The editor has received a new briefing tab in the setup. In the future, when you create or update new planets, you will be able to write an introduction, mission description or story that the player will see first when downloading and playing the planet via Steamworks. So far you could already upload a script for planets, but the menu structure in Competition and Freeplay could not display it yet.

The briefing is the first step. Soon you will be able to add your own mission objectives, events and dialogs to this script, use characters from the game as voice actors and possibly create your own characters as well as make buildings. And ultimately combine the planets into a campaign galaxy. This will be great, we just have to ask for some patience for this feature….

We also fixed a funny bug: if the planet creator didn’t specify their own faction, the game would assign them an AI faction, which would then blithely mess with players. We’ve also fixed some of the AI’s biggest quirks.

We made small many control improvements and user interface optimizations, as many newbies were still having trouble getting to grips with managing entire planets.

Soundtrack sales in this bundle will be donated to plant trees.

Join us on Discord for regular updates on ongoing development and to share your thoughts and ideas.

There is a call on our Discord server right now. We invite you to suggest names for planets that we can include in Imagine Earth. We are working on a new game mode where you build a main space station while conquering procedurally generated galaxies. So we need names for all these generated planets. Can you think of names of planets from famous science fiction movies, comics and books that people would like to recognize? e.g. we already have Betelgeuse 7, Melmac, Altair, Kepler 186f…. in the game. We are looking forward to your ideas, post them in the General Channel on Discord or here in the forum!

Have fun with Update 1.02 and see you next time,
Martin and Jens