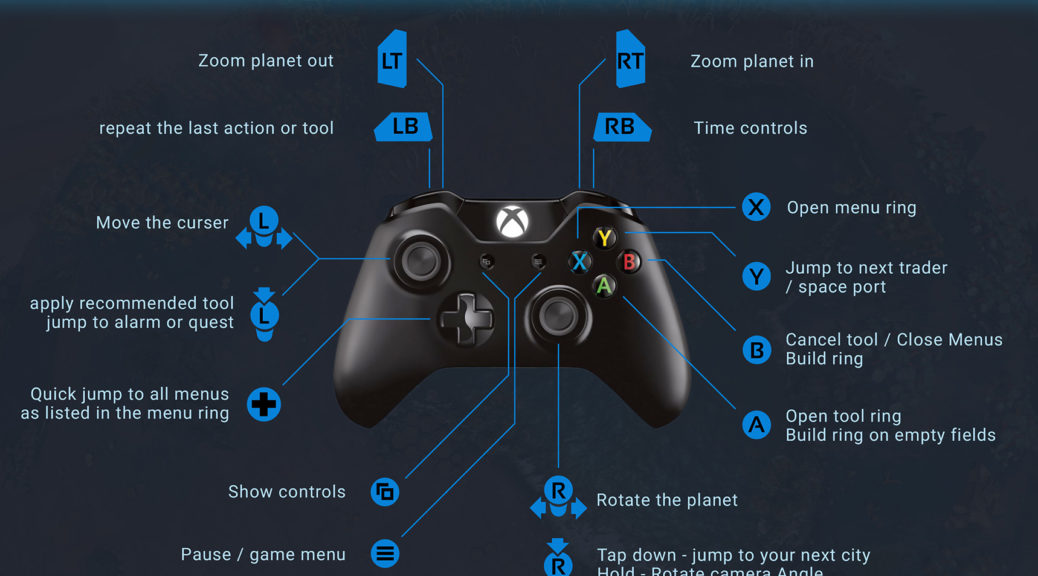 Friends of planetary colonization, finally a new update is ready and delivers a big chunk of improvements. One of special importance is the integration of the gamepad control, for us the opportunity for a major overhaul of the whole interface. Controller support is important for the XBox version but would you use it on PC? Tell us how you think about it and what else could be tuned. Have fun reading and trying it out, here’s the direct link to the feedback forum.

No more research budgets are required to research in campaign. After the system of tokens and budgets was already switched off for other game modes, you can now finally do research in the campaign without having to wait for another budget. All you need are research facilities to drive the process forward. City centers also come with a built in research unit. Of course you can still buy and sell budgets, they are now called licenses and activate researchable options directly.

We installed a new sound system to bring atmosphere and plausible sound backgrounds to the planets, so that the environment feels acoustically richer. First there is an ocean sound, which now increases in volume the more oceanic fields are nearby. Next, we will apply this to city and forest sounds, for example.

We have invested an amazing amount of work in the implementation of a game pad control system so that the game can be released on the Xbox console at the end of January. Because of the use of rings and radial menus from the beginning, the whole thing turned out to be very intuitive and if you know the right places, it works surprisingly faster than the mouse control. But as the headline makes clear, this is all prototype. We would like to hear your opinion about how the game pad control feels in this first version.

One advantage of the whole game pad conversion was that we redesigned a lot of buttons and menu structures to be more readable and accessible. For example we found old load game menus that were long forgotten over time.

Previous tool tips have often covered the control ring half or almost completely. Therefore, the tools with name, price and description have been moved to the far right.

Three new synphonically composed music pieces underline the flow of Imagine Earth in the new version. It is remarkable how much the music adds to the overall atmosphere of the game.

The dustiest menu of this upgrade was the Colony Rating, so it really deserves an all around makeup. New colors and functions. A division is now called “Commodities and Capital” and counts the liquid capital of a company and also the market values of its buildings there and includes them appropriately in the share value.

What should not be missing in the game development is that one of the missions of the story-based campaign needs an update as game features and controls have evolved. This is always a great way to give the mission a refreshing touch.

We delivered this area with a small but crucial weakness in the last update. You couldn’t click on the upgrade buttons and couldn’t jump directly to the buildings. This is now history and the control has been optimized a lot. The tab for dirt and the condition of the buildings has been split into two separate tabs where you can now also directly initiate a repair or a cleaning.

This button now makes the total number of pollution, building demolitions, incidents with poor quality of life and loss of productivity visible and allows you to jump there directly.

Creating a new game has now become even more goal-oriented and handsome. Some inconsistencies have been fixed and the menu as a whole has been made more attractive.

Now the achievable goals are also visualized on planets. This makes it a visible challenge to drive the success of the missions to perfection.