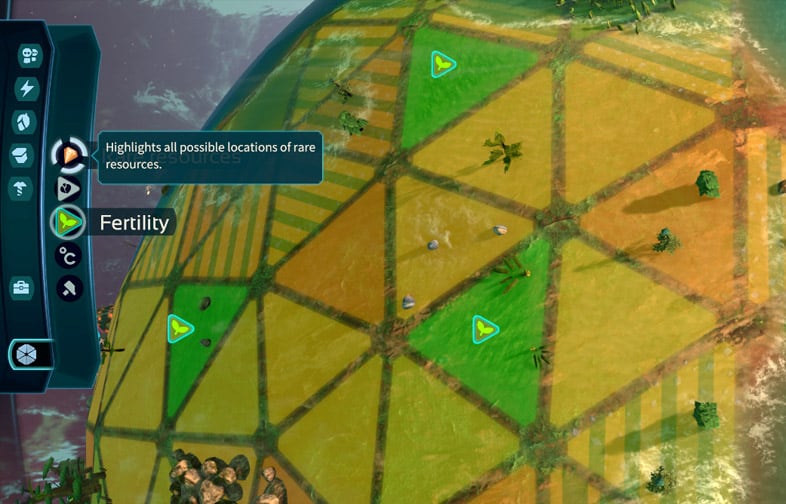 So, just as you’re used to from seven years of Early Access, we continue to make Imagine Earth better and add new features. You can be curious about what is still to come and please do not stop to contribute your feedback, ideas and wishes to the development.

We want to move further in the direction of making automation work better. An important step in this direction is the auto-mining function for warehouses named in the title.
When you activate it, your harvester drone automatically flies off and harvests valuable resources. The system even makes sure that different resource loads are collected evenly and prioritizes those that you have reserved for storage. The previous mining tool then also serves as a way to manually prioritize a resource for mining.

It is now possible to activate overlays for rare resources, fossil resource deposits, fertility, temperature and building types via the building menu on the left side of the screen. Some will recognize these from an earlier version. Back then they were immature, but we have revised and brought them back.

We’ve optimized the gamepad controls and now you can use the directional pad to jump directly to your spaceports to trade, jump to workshops to craft, or jump to the cities or gaia constructs in your area of influence.

When you build a new world in the world editor, you can now click on the factions at the bottom right to switch to them and build buildings for them. Another step in the direction that you can soon script entire missions with story.

Personally, after the particularly brilliant start of the final version of Imagine Earth, we currently have mixed feelings about the feedback we get. Regarding the reviews, it just feels like the game is being torn between two fronts. Some complain about too many dialogs and constant explanations, while the other front is unhappy about too little tutorial and too weak, incomprehensible instructions. Looks like this is really a tricky topic and we have to admit that the idea of making it a challenge to explore and understand the game itself doesn’t have the necessary appeal for everyone.

Anyways, we would really love to have a broader picture, so if you have played Imagine Earth already and normally don’t feel like writing reviews for games, we warmly invite you to take a few minutes and give Imagine Earth a review.