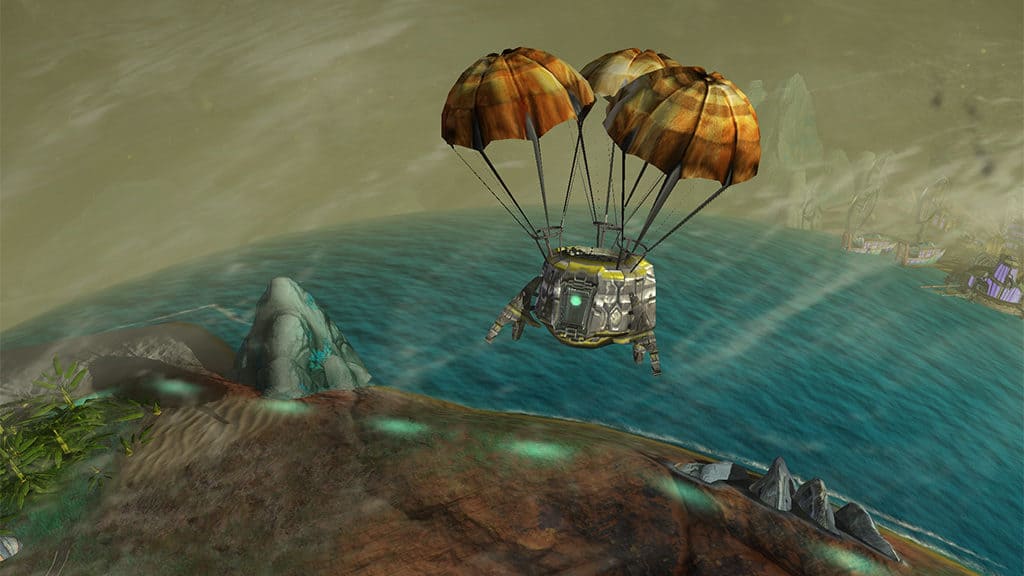 Again we have a big December update for you with lots of interesting features that will refresh the space colonizing business. Have a look and give us your feedback on how they work…

Of course we’d like to take the opportunity to wish you all pleasant holidays and a happy new year in advance! We plan to celebrate the final release of Imagine Earth together in mid 2019!

The Sabotage item hacks supply buildings within a small radius and sets them into the state of malfunction in which they stop production and are constantly damaged until the building is destroyed or the malfunction is fixed.

Supply capsules contain items, resources and building construction kits. The colony that claims the field it landed on can take the cargo. The capsule will then disassemble automatically. They will land randomly on the planet throughout gameplay.

New orbital lifts show you when colonists are coming or leaving your colony. This animation makes the colony more lively and visualizes where the colonists come from and where they disappear to when the quality of life is too low.

In the campaign galaxy you will now see a completion panel that shows your overall campaign progress. More important the colony ratings on all planets are wrapped up in a company rating that is compared in a global ranking.

You can now revisit colonies after finishing the mission to find the remaining ideon crystals and to raise your colony rating by expanding your colony.

Campaign research and unlocked buildings are permanent. So you can use the technology you gathered in later missions to advance the cities when your return to earlier colonized planets.

Other corporations now have three shared diplomatic statuses: rivalry, neutral or alliance. They define if other factions trade with you and if there will be discounts. It also influences AI behavior: An alliance partner will respect your territory – a rival will actively grab your land.

We have added brand new AI behaviors to make factions more lively and authentic actors in the game. They may contact you via the message system and to propose neutrality or an alliance. In addition they will cancel an alliance or even declare rivalry when your relation is very bad. The AI remembers when you have helped against threats like an epidemic and alien invasions by using items or temple powers