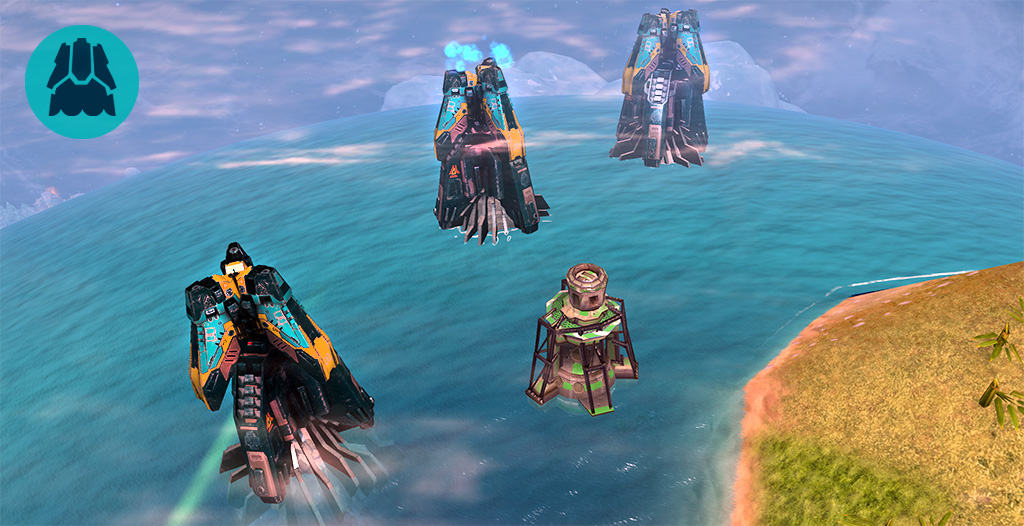 The first update of Imagine Earth in 2019 brings you a new power construct which is built on the open sea with three brand new forces to unleash and a devastating catastrophe. As always there are tons of UI, AI and game balancing improvements. We reworked the first three missions intensively and enhanced the effects and visualization of global warming… We hope you enjoy the latest features and changes and send feedback and requests into our forum! Cheers, Jens & Martin

The ocean citadel is a powerful construction of the Nootilas, it can convert Gaian energy into force fields which influence sea and weather conditions. It is to be found on the open sea of course.

A power of the ocean citadel provokes a thunderstorm that moves across the planet in wind direction. The storm can cause wildfires and incidents in production facilities. Thunderstorms are also natural catastrophes whose occurrence becomes more likely with increasing global warming.

This power of the ocean citadel generates a gaian force field that vitalises the flora on the seabed and allows sea plants and occasionally corals to grow. This is helpful to re-balance the carbon emission balance on the planet.

This Gaian force field of the ocean citadel lowers the tectonic continental plates – entire regions sink into the sea. Keep the mouse button pressed to apply the power.
Land reclamation works the same way from now on.

Multi-use of powers and item

You can now reuse forces and items by holding the shift key as long as you have more items of the same kind or enough gaian energy left in the according power constructs.

Due to the importance of this feature we have represented Global Warming more prominently in the Interface. You get a permanent display and icon for the emission balance and the global warming in percentage. And there is a global value of sea-level and temperature rise. The population counter has moved to the left of the UI also because it is not global.

For better information it displays how high a certain piece of land is above the sea-level which is of particular interest in case of global warming. Will it be flooded by the melting polar caps?

We deactivated the quarantine of the planet in case of climate collapse which ended game way too early. You can now live on a ravaged planet with maximum climate chaos and all the catastrophes arising with it and still try to make your living or win a competitive round somehow.

You can activate this quarantine when starting a new game to stop a round when it gets almost hopeless. Also we changed the visualization of high global warming which was a bit over the top with yellow coloring of the oceans and the atmosphere.

Again we had to rework many aspects of the first three missions of Tuto, Joma and Lorian to improve the experience of the campaign, make it more accessible to new players and adjust them to the lately added features.