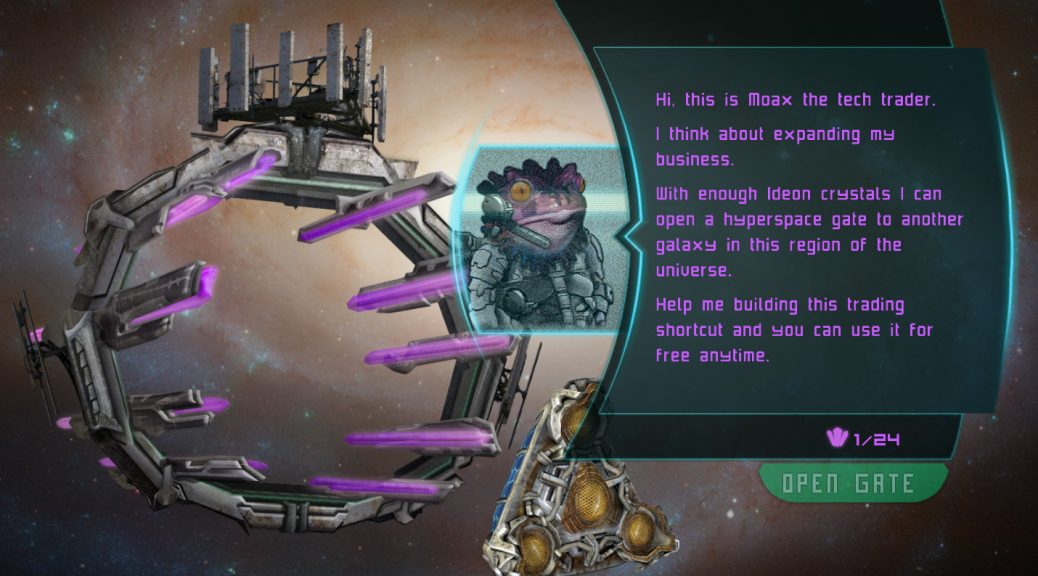 Welcome to the hyperspace! We are starting to extend the campaign with bonus planets you can access using a hyperspace gate. This gate is being build by Moax the tech trader, who will be able to complete his construction if you find and deliver him enough ideon crystals during the campaign missions.

The gate leads into a new galaxy that contains new planets and missions.

Edora is the first planet in the Udoxia Galaxy. A small planet with giant icebergs at its polar caps. The low valleys of this planet will be flooded immediately by the melt of global warming.

The planet offers a predefined expansion competition against two opposing fractions. This world is also the experimental test ground to establish and improve AI battles in the game. Please give your feed back on how we could improve the interaction with other factions.

Having predefined competitions with a general comparable highscore might be the main concept of the missions in this galaxy. It adds playable content and challenging competition with some additional extra goals to master. This reduces the necessity of story filled scripted missions that need endless balancing.

This short-lived race of typhers and diggers builds giants machines to rummage through entire solar systems searching for rare earths and noble metals. Even though they totally ignore money they are valuable trading partners. They produce rare items and exchange them for raw materials. You will meet these dudes for the first time in a reworked Lorian mission… and they will occur eventually on all following planets. We have put some additional work into our terrain texturing algorithm to make sure the characteristics of each field are visualized in a clear way. This includes the fertility, temperature and rockiness. In addition fields that might be flooded by rising sea levels have a more sandy or stony look. The transition from one characteristic to another used to be quite blurred. The new shader uses material based alpha blending to enhance this. For example you will see little green spots on terrain, when it becomes more fertile. The updated use of transparency for deciduous and acacia forests, mushrooms and palm trees shows a great way to revolutionize the overall look of Imagine Earth’s flora. Deposits of this new rare metalic resource can be found primarily in the dryland biom which are infertile areas with medium temperature. Titanite is so far just costly and exchangable with bombs at the Minas store.

For those in our community who are interested in translating the game. It is finally possible to do translation of the mission scripts as well. Now it is possible to translate every single written word in Imagine Earth. All details are explained in the community translations section of the forums.

As rockets are now at the end of the research chain. Luckily you can buy rocket building sets from our latest alien race, the Minas.

We have implemented flying construction drones. They lift off and land in a new hangar at the city center tower. It’s an early version but its already fun to see them being busy to set up new constructs. Future implementations might include harvester drones for resources that start and land on warehouses or automated repair drones on the repair units. Currently the city center has one drone per city level.

PS: Thanks to all of you who voted us in the indie of the year competition. We made it into the overall top 100 and the top 4 of futuristic sims – next to Space Engineers, Empyrion and RimWorld!