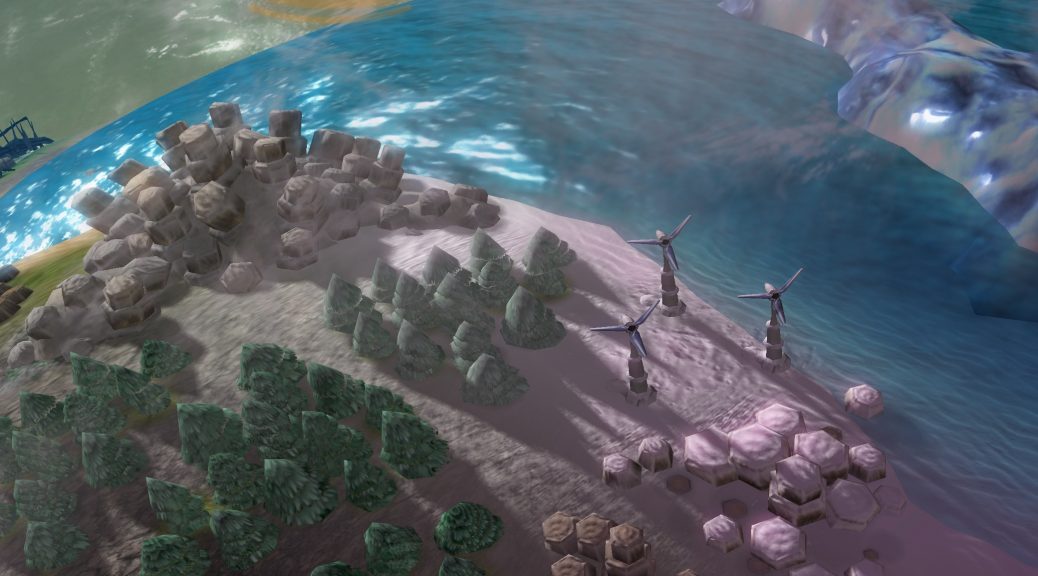 Important: With this release we switch our underlying technology from XNA (DirectX 9) to MonoGame (DirectX 11). We have tested this a lot, but it’s still possible that some of you are having problems. Please send an email to support@imagineearth.info.

This release comes with the following new content, gameplay features and UI improvements:

Although watching Game of Thrones took some of our precious time we are still very satisfied with the results ;-). The next things on our list are: Improve the trading system and UI, add new resources to the game that are not part of your population’s needs, add more visual life to the planet and more. There are three things we have done here. First, we have made the laser upgrades available for frontier buildings (tower and buoy). That allows you to defend against meteorites and Xrathul without having to build a research district somewhere outside your cities.

Second, the frontier buildings now also have the shield generator upgrade. It allows you to protect the surrounding fields from tornadoes and volcanic eruptions.

Third, the “Anti-Xrathul Laser” is now called “Pulse Cannon” and received some new visuals as you can see in the following screenshot. The logistics center is a complete new building. It optimizes the production and transport of goods and food. The performance of every neighboring construct producing these resource types is increased.

The center can be equipped with auto repair and remediation upgrades (at the same time). Both upgrades are no longer available for frontier tower and buoy station.

There is a new “Infrastructure” category in the build ring which is also visible in the technology menu.

The last releases have added things like ground fertility and temperature to the game. A local temperature of under -5°C is now visualized by a decent snow cover on the planet, trees and buildings. This is especially important for farms, because their productivity is much lower in cold regions. Selling colony shares allows you to increase your capital. In addition you are able to take over cities of other players, by owning 50% of their shares (free play and competition).

This is obviously a very important feature that was not well represented in the user interface. We have added a new slot to the resource bar that gives you quick access to the shares options and shows how much shares you currently own. PS: Note that you have to pay a dividend to the owners of sold shares. If you buy shares from other companies, you get paid a dividend.

We have decided to increase the total number of research points you can earn in the missions. This means tools and upgrades are no longer unlocked in groups of two. This change also gives us more freedom in terms of adding new stuff to the research.

The migration logic should automatically make sure you keep the things you have researched. The user interface at the middle bottom of the screen has received some polishing. All options (previous messages, navigation mode, victory points, statistics and menu) are visible at any time. Time is now visualized in a way that makes it easier to recognize the numbers. For example “34:06” is 34 space minutes and 06 seconds which is comparable to 5 and a half years on earth (one space second is round about a day). The speed of time is still controllable in 5 steps ranging from one-quarter speed to four times the speed.

Last but not least a new “power feature”. You can use the numbers keys to bookmark specific fields and jump to them by clicking the number or the new user interface elements at the top right of the screen.

To create a bookmark simply hover a field with the cursor and press the number key for a few seconds. New built cities are automatically added to your list of bookmarks, but you can also use this feature for quick jumps to an enemy colony, a temple or another interesting region on the planet. With this release we switch our underlying technology from XNA (DirectX 9) to MonoGame (DirectX 11). This makes it a lot easier for us to find bugs and enhance the performance of Imagine Earth. We have tested the MonoGame version a lot, but it’s still possible that some of you are having problems. Please send an email to support@imagineearth.info.