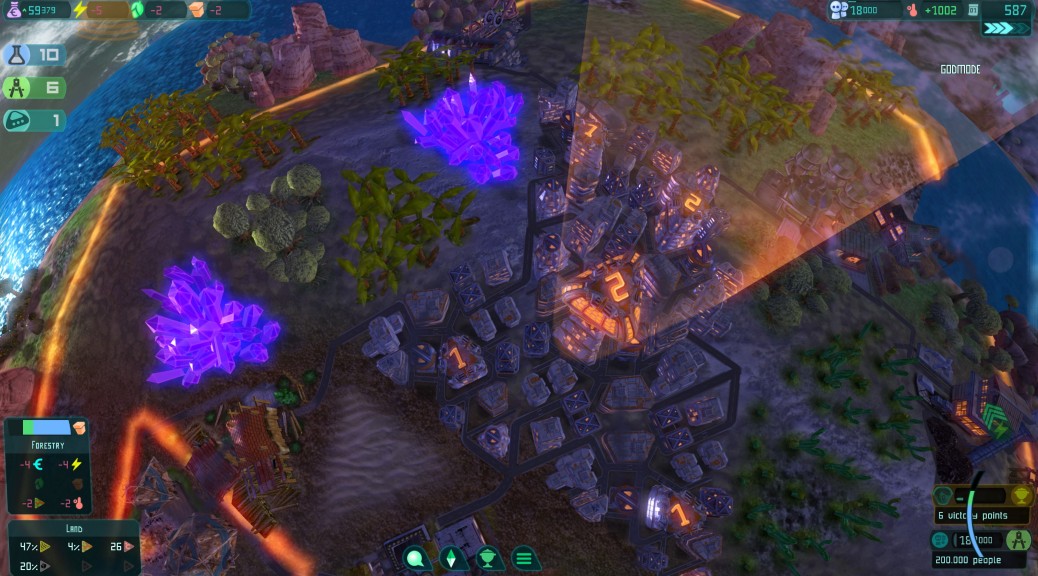 Here is our Easter release: Alpha 21 “Taking over!” – 10 new features – all in one basket. Please leave a comment to let us know how you like it!

Take over colonies
of other companies

You can now take over your opponent’s cities in free play and competition mode one by one. All you need is 50% of their shares. When taking over a city you give up shares with the same value as the city and you have to pay some additional money. And then… it’s all yours! A new economic way to world domination. We added some up to date visual effects, namely bloom and blur to the game. See how beautiful the sunlight is now reflected on ocean water and the shiny metal roofs of your colonies, as well as bonfires, cities lights and crystals are glowing in the dark.

In addition the research, technology and stats screens received a smooth blur effect in the background. Long since there was more to be know about the ground types and fields on “Imagine Earth” than the old info panel could visualize. So here’s the new one with less bars and a fixed window position. Fertility, pollution and temperature are very important factors that now each have their own slot and are readable in a clear way.

With this interface change made we also decided to let the fertility of a field influence the food production. This means the bonus on a fertile field now depends on the exact fertility and the handicap on a desert field depends on how much desert-like the field really is. As a result it’s now much easier to find an acceptable field for a farm – and it feels less like a puzzle game.

With the new Info Panel there are now up to three different fossil resources in one field. We therefor removed the general fossil type because it was confusing. Now every fossil production building (e.g. coal power plant) will only be influenced by it’s corresponding fossil resources (e.g. coal).

Ore is a new fossil type that boost the productivity of mines.

The second items in the merchants shop are ideon bombs. As powerful as they are expensive, but finally a way to blast the small mountains out of your way that are hindering the expansion of your colony. You can now research the blasting of rocks. This helps you to get rid of them much faster. It’s more cost intensive but time is money, isn’t it? Leveled city districts have a new very important function in the free play and competition game modes. They add to your amount of science points. This amount will unlock new research budget which allows you to unlock the blessings of latest technology achievements for your colonies. In addition you can also get some research budget at the merchant – for a lot of money.

In the competition mode you will now be notified whenever you or a concurrent company earns a victory point.

Still needs some fine tuning… but much better than when these guys where just hanging behind the text boxes. If you ask me.

That’s all for today, thanks for reading! Remember: Please leave a comment to let us know how you like it!