Dear Space Colonists, the Serious Brothers proudly present alpha release 33. It involves crafting and hacking and we where also present at two conferences during this update cycle – in case you are wondering what took us a bit longer this time. As usual we’d love to hear how all the new features work out for you. Please leave us your comments and ideas.

Crafting Items in the Workshop One of the main new features that come with this release. In the workshop you get a list of special items that you can craft yourself instead of buying them. They are listed with up to 3 resources that you need for the generation of a certain item and it also shows if these are available or not. This will enhance the trading system as well because you can buy most needed resources from other factions. In the future it might become necessary to buy new  construction plans or recipes from your trading partners. But for now we have a basic set of strategic things that we will try to balance out.

This plant is a new rare resource used to craft the fertilizer and explosive device items, because it enriches nitrogen and salts. It can be found in mires and cold but fertile biomes – and was also added to the campaign planets.

The Midras are selling more rare resources as they are now needed for many crafting issues. For crafting it was also necessary that goods, energy and food that you particularly chose to lay in and reserve space will no longer be consumed by your personnel in times of shortage. That change was made as well because you couldn’t sell stored things when they are always eaten up by hungry colonists.

We have lately fixed a long time overseen graphics problem concerning texture mipmapping. The whole planet with all the stuff on it should have much higher resolution by now!

Breaking Waves at the Sea Shore

Beautiful waves and a soft and organic water line on the beaches improve the look and feel off our oceans now.

Towers do no longer need a field connection to the city center, the land claimed by your towers and therefor the towers them-self remain yours even when your city center is lost.

Buy this item from the tech trader to hack and take over an adjoining tower of another faction. They can defend themselves by use of such a Hacking Kit as well. so it makes sense to keep one in your inventory just for security reasons. The AI will also make use of this, once they feel like this is a good decision.

From now on you can always repurchase your shares for twice the price if somebody else owns them. The shares will be taken from the company owning the most of your shares.

You do no longer have to obtain over 50% off an opponents shares to take over a city that is smaller than 50%. The take over fee has been reduced to 8.000 space coins.

Our AI companies can now use the land claim feature to obtain fields adjoining their build radius. They will eventually use the hacking tool to take over your towers – take care!

There is a new variable range of global planetary temperature that can be defined when creating a new planet for competition mode or free play. The global temperature is raising up to 10 degree until the final climate collapse happens.

This is also important for the health of local flora. Some sorts of trees and plants will not stand a chance in snowland anymore but they will regrow leaves as soon as the temperature raises to positive numbers again. Water temperature is limited down to minus 2 degree Celsius.

You will be able to experience this phenomena particularly well on the new ice planet we are currently working on.

Serious Brothers where present at the international Games Week Berlin and showing Imagine Earth on several Events. Indie Game Expos at Quo vadis and Making Games Festival on Mo – We and at the A Maze Festival on Friday. 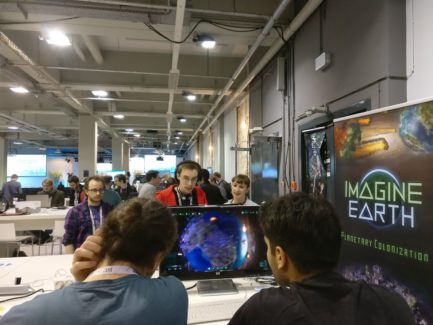 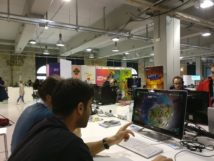 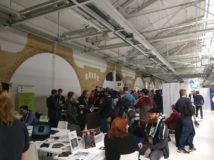